Mandi and I recently had a few days off in a row which coincided, and wanted to do something special with the time.  After a little brainstorming, we decided to visit Lakeside, Ohio, the site of many happy childhood memories.  Mandi reminded me that's where she learned to ride her bike (which I had completely forgotten, how is that possible?).

We made arrangements for a place to stay for a couple of nights, called Aunt June to see if she would be in town so that we could visit for a little while, and eagerly anticipated seeing how much (or how little) Lakeside had changed from so many years ago.

For anyone not familiar, Lakeside is a gated community of mostly summer cottages, which means visitors and homeowners alike purchase tickets or passes to get in and out of the "Pearly Gates" during the summer season.  If you have a vehicle, that also requires a pass. There are passes for a day, a week, or the full season, which, if memory serves, runs roughly from Memorial Day to Labor Day.  We each needed a day pass, and of course a car pass.  Some owners have insulated and otherwise 'winterized' their cottages, so they can visit year round, or, if they are particularly hardy folk, could stay throughout the winter.  (Not many do.)  Lakeside is also a Chataqua, which, as far as I have been able to figure out, means that it's overseen or managed by a church or group of churches.  It is a decidedly friendly and family-oriented place.  After finding a spot to park the car, we made our way several blocks towards the shops, thoroughly enjoying looking at all the cottages, greeting anyone we met, and petting the occasional dog or cat we encountered. One of the friendliest adult cats I've EVER seen crossed the street to meet us, began purring immediately, and provided us with maybe fifteen or twenty minutes of her quality kitty affection.  It was pretty amazing. 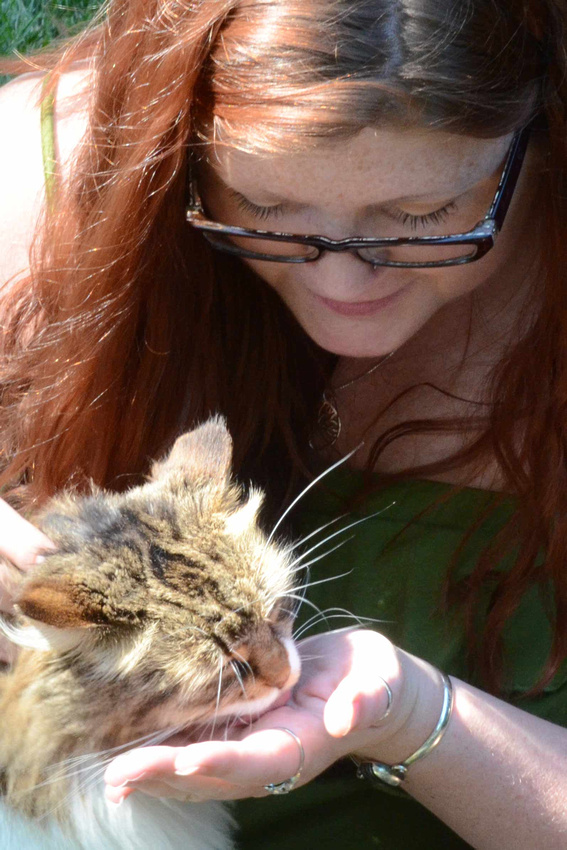 We eventually passed the dock, the playground (where the equipment is far more extensive than it was when my kids were kids), and the busy Putt-Putt golf course.  Then there were the legendary shuffleboard courts, with quite a few games in progress, and participants ranging from little children up to great-grandparents.  Shuffleboard is a game of skill, but it's enjoyable to play even when you don't have a prayer of winning, just because it's fun!

Of course, we had to check out 'Grandma's Cottage', which didn't look all that different than it did forty years ago.  The current owners have it painted soft yellow, and I think it was white in Grandma's day.  The tree she planted in the front has grown massively large, of course, and there's apparently some new project in the offing, judging by the brilliant blue tarp draped over the pile of 'something' at the base.  Many a lazy afternoon was spent by our family members on that screened-in porch, reading, playing board games, or just chatting. Sweet memories, indeed.  I'm sure the current owners enjoy the same tranquil pastimes, but now it's probably a little more electronic than in the past.  I couldn't help but wonder if it still smelled the same inside, a deliciously ancient combination of fireplace, beloved old books, and freshly baked 'whatever'. 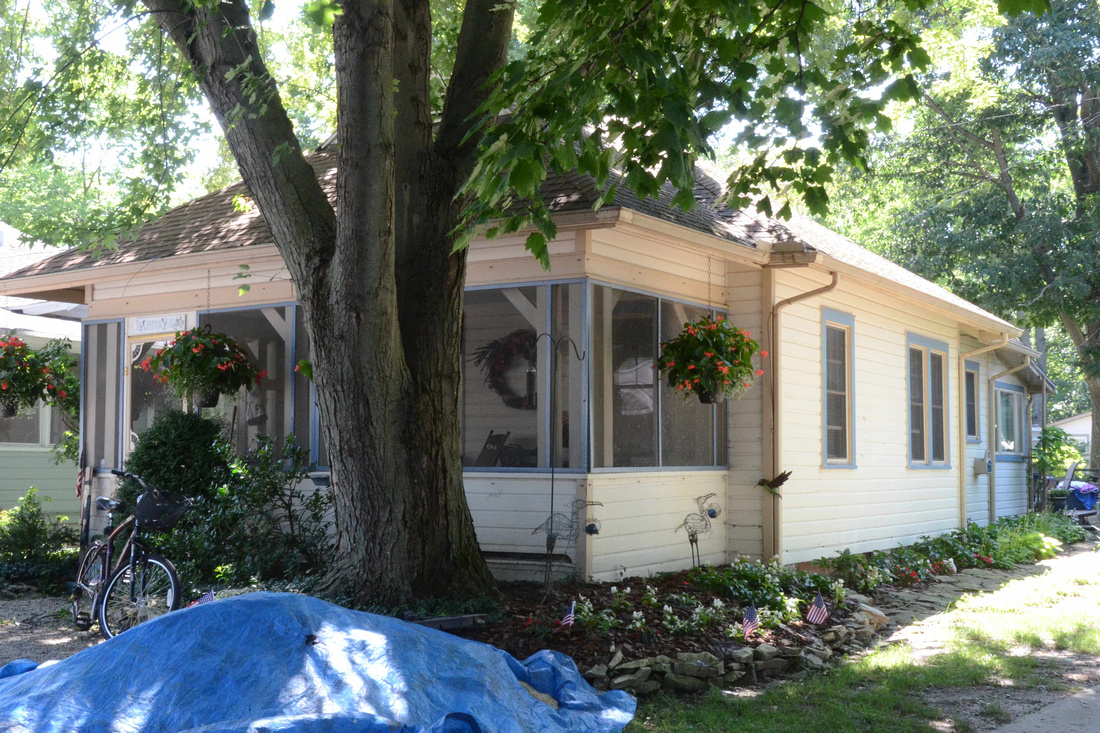 On the recommendation of a friendly local gal, we decided to check out the menu at the locally famous Lakeside Hotel, a lovely place decorated in Victorian furniture, and featuring a casually elegant dining room facing the lake.  I was a little worried that it might not be affordable on our budget, but it turned out that it was, and we enjoyed delicious salads for our late lunch.  Then we started walking back along the lake, where the ever-changing view calms the nerves and soothes the spirit.  Most everyone we met along the walkway said hello, which was very nice, and a bit unusual for Ohio.  (I was born in Alabama, and that's standard behavior there, at least in the small towns.) Below is a photo which is a duplicate of one I shot at least thirty years ago, and I'm pretty sure it's the same tree...  what a peaceful scene, with the gentle white-caps rolling in. 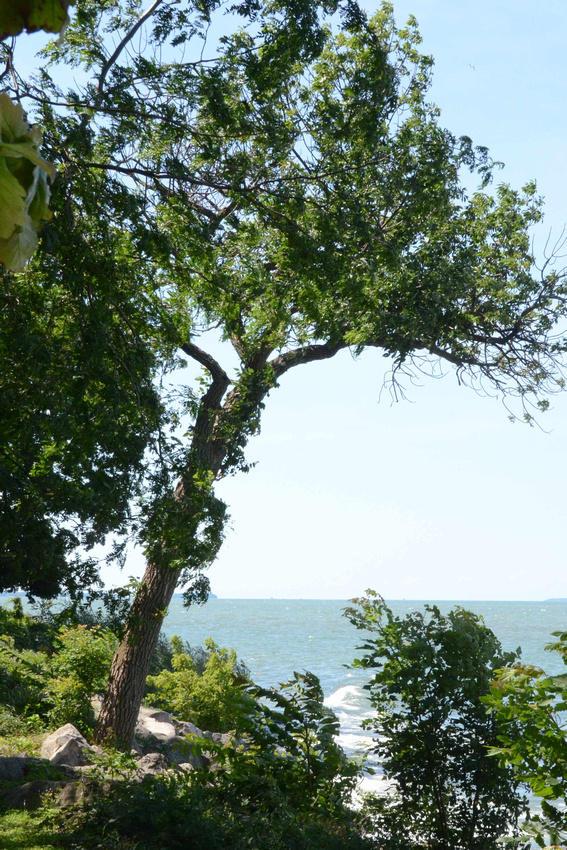 We gave Aunt June a call, making sure she was home, and she said she'd be home a little later.  Since we had some time to spare, we drove over to Andy's Party Mart, where for as long as anybody can remember, they've served the best hand-dipped ice cream cones IN THE WORLD.  We had to make sure that was still the case, of course!  And, indeed it was.  We sat on the bench outside, which has been there forever (as far as I know) and enjoyed our drippy delicious Toft's ice cream.  Great fun.  Now Toft's is available in Brunswick, but this was an experience not to be missed, just the same, because it was a childhood tradition for Mandi, and well worth repeating! We also bought some delicious fudge to bring back home & share.

When we arrived at June's condo, cousins Kelly and Chris were there, and Chris' wife Betsy, so it was an even better family visit than we had thought it was going to be.  I spotted a heron perched on the breakwall, and walked down to get a photo of him.  After he flew off and then returned a couple of times, with me clicking away, I reviewed the images in the camera and found this beauty!  Needless to say, I was tickled to have caught him silhouetted against the setting sun. 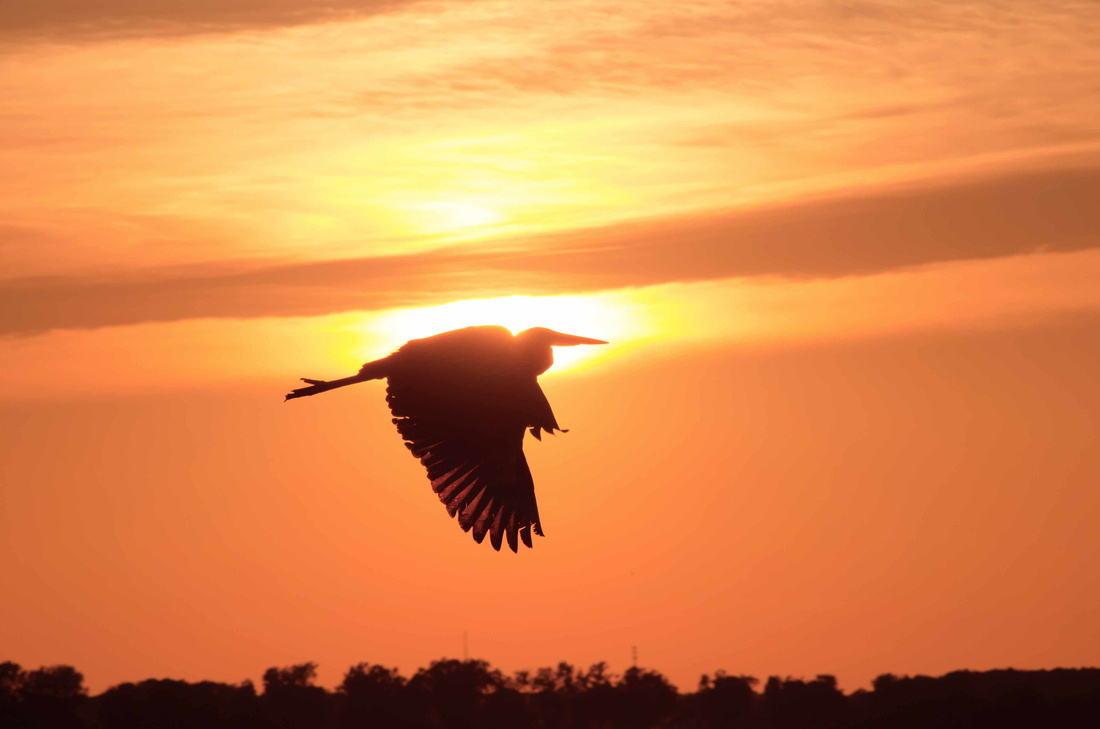 We stayed several hours, catching up with everyone, then started off for home.  We stopped for a sandwich at a local sports bar adjacent to one of the many marinas  (the name of which escapes me) and enjoyed our outdoor seating... just far enough from the music inside so that we could have a nice conversation.  There was a patron there with his beautiful Husky, and Mandi got in a little canine visitation with him, naturally!

All in all, it was a wonderful, relaxing time...   Mandi and I always seem to enjoy traveling together, whether it's across the state, across the country, or half way round the world (the week I spent in Germany with her last summer was the trip of a lifetime!)  Looking forward to the next opportunity, whenever it occurs!